If you know Welch Allyn, then you know Hillrom.

Discover what the future holds >

Sarah Watson: A Hero in Aviation and Saving Children’s Vision as a Lions Club Member

“After my wheels left the ground for the first time, I remember thinking, I can’t believe I am doing this,” says Sarah Watson. “My second thought was that this is the most amazing feeling I have ever felt. As I looked down, I could see my past, and up ahead I could see my future.”

Sarah Elizabeth Watson grew up in Luckey, Ohio, a small town in northern Ohio near Toledo. As a young child, she dreamed of flying airplanes. For her 13th birthday, her mother, Colleen, took her to the local airport where experienced pilots took children up in a small Cessna airplane to get them interested in becoming pilots. As Sarah sat in the seat next to the pilot, the pilot asked if she wanted to fly the plane. She took control and the pilot told her she was flying. Sarah had butterflies in her stomach, like the ones you get when you fall in love. She knew she had found what she wanted to do for the rest of her life.

A Career Destined to Fly

After graduating high school in 2006, Sarah attended Bowling Green University to study aviation. After her first year, she realized how expensive college was and couldn’t afford the next three years. She searched for assistance and found the Air National Guard. In July 2007, Sarah enlisted with the Air Force and spent the next year in boot camp and technical school. After receiving scholarships and working two jobs, she earned a Bachelor of Science degree in Aviation Technology and Operations. She then applied for pilot school and was accepted at the Georgia Air National Guard where she received Officer Training, Undergraduate Pilot Training, Graduate Pilot Training, Water Survival and Land Survival Training.

Sarah eventually earned her wings and graduated to the C-130, a plane that primarily performs the tactical portion of an airlift mission. In an aerial delivery role, it can airdrop loads up to 42,000 pounds or use its high-flotation landing gear to deliver cargo on rough dirt strips. 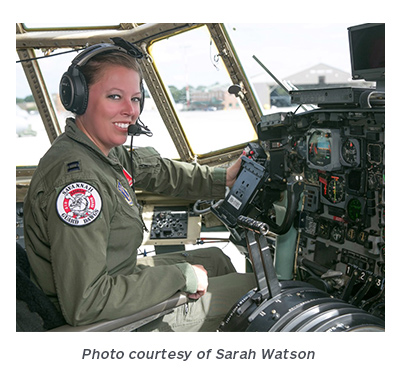 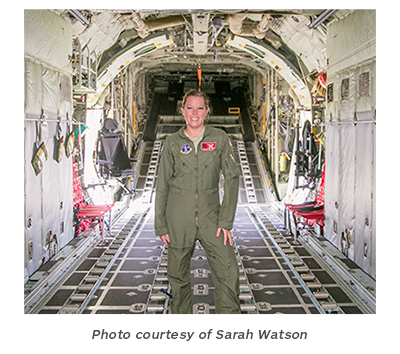 In September 2017, Sarah piloted the C-130 in a critical mission to help thousands of people affected by Hurricane Harvey. Hurricane Harvey brought Category 4 winds and record flooding to Houston and several cities across southeast Texas. She describes Hurricane Harvey as an eye-opening experience. “Being there first hand, seeing the destruction to people’s lives was heartbreaking,” says Sarah. “It was humbling to see the hope we brought with our aircraft, the water we were carrying and the safety we promised to deliver.”

For ten days, Sarah was part of a rescue and relief effort made up of eighteen C-130s from nine states. She flew 18,000 pounds of potable water, carried displaced residents to a shelter in Fort Worth and watched families live out of a small garbage bag of possessions. It was a devastating experience, but a great feeling knowing she was making a difference in people’s lives.

Helping others is exactly how Sarah got through a difficult time. When she moved to Pooler, Georgia, a few years ago, she was looking for something to occupy her free time. Sarah was dealing with the death of a beloved cousin and decided she needed to find something to mend her broken heart. After receiving the Pooler Magazine, a magazine highlighting people, places and things to do in Chatham County, Georgia, she found the Pooler Lions Club. She joined the Pooler Lions Club three years ago and has become an integral part of her community. “I love the work I do with the Lions Club and seeing the difference I make every time we volunteer,” says Sarah.

Making a Positive Impact in the Community through the Lions Club

In her current volunteer role with the Lions Club, Sarah is one of two vice presidents. Most of her time is spent on vision screenings and coordinating membership rallies. Over the past three years, the Pooler Lions Club has screened more than 15,000 children with the Welch Allyn Spot™ Vision Screener. For Sarah, the best part about her role in the Lions Club is knowing the difference they make in people’s lives. “Seeing the positive impact we have on the people and the community around us, makes me feel like I am doing my part to make our community a better place,” says Sarah.

With the help of the Spot Vision Screener, the Pooler Lions Club is catching vision issues all over Pooler and surrounding cities. At a local fair, two parents came up to Sarah with a two-year-old child wearing glasses and a six-month-old infant. They told Sarah how incredibly thankful they were to the Lions Club and the Spot Vision Screener for saving their infant from severe vision issues down the road. “We are reaching a much larger scale of children and finding the flaws in their vision. It’s one of the best parts of my job,” adds Sarah.

Thank you to Sarah Watson for her dedicated service to our country and our children. 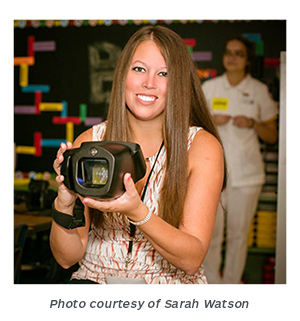 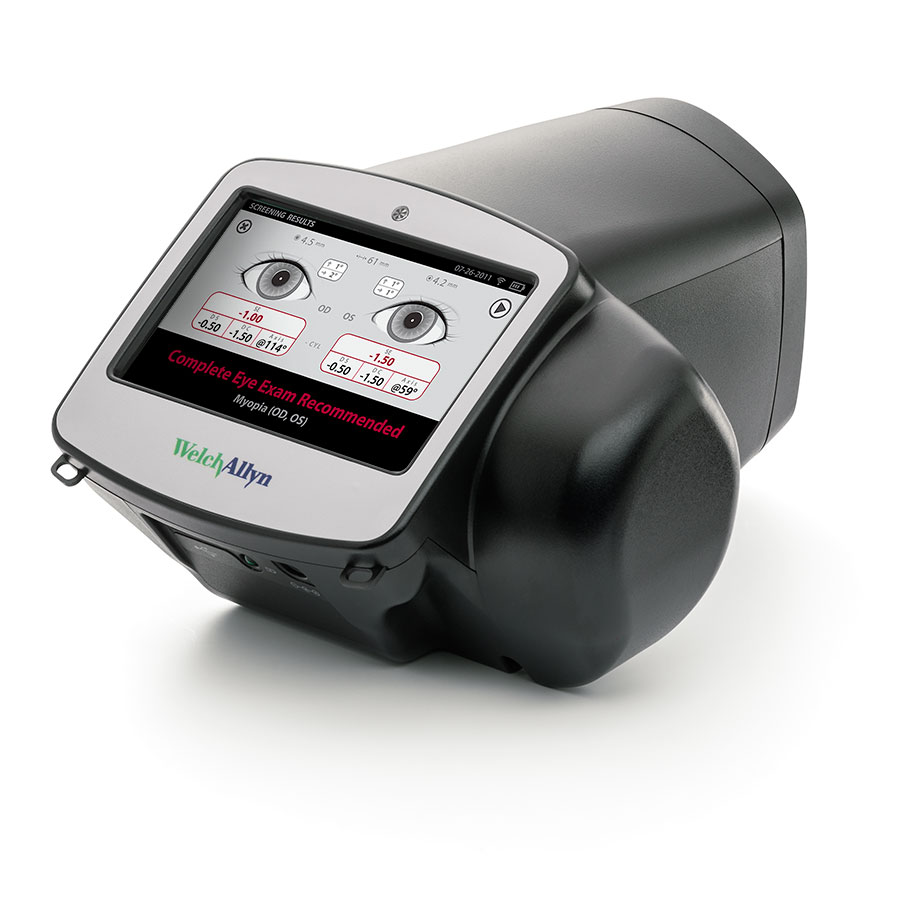